I have been constantly asked questions by genuine Muslims who are concerned about whether using an inhaler breaks ones fast. These people, virtually all sufferers of the very common but potentially fatal condition asthma, desperately want to fast but have been told by the scholars that they are not able to.

When a person uses an aerosol inhaler, the medicine (whether in droplet or powder form) enters your lungs from your mouth, throat and trachea (windpipe), but there is a possibility that a very small amount may enter your stomach and the vapour from it will also make your mouth and throat until and including your epiglottis (the flap that prevents food going down the ‘wrong way’) wet.

An aerosol is a colloid of fine solid particles or liquid droplets, in air or another gas. Aerosols can be natural or artificial. Examples of natural aerosols are fog, forest exudates and geyser steam. Examples of artificial aerosols are haze, dust, particulate air pollutants and smoke.[ii] So it goes to the level of the throat up to the epiglottis which separates the windpipe (air) from the oesophagus (food). The inhaled substance will go the windpipe but a very tiny amount can theoretically (I am certain that like most things they talk about with confidence, Muslims have conducted no scientific or controlled studies of this whatsoever) sit on the epiglottis and fall into oesophagus and then the stomach. 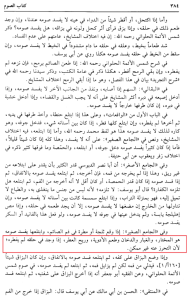 The red box states that dust particles, smoke, the taste of remedies/medicine and the smell of perfume do not break the fast. This reference can also be found in the other authoritative works of the Hanafis such as Bahr-ur-Rahiq, An Nahr, Fath al-Qadir and Wiqayah.

It is also be found in a large number of Hanafi texts that using a steam room whilst fasting does not break your fast. In a steam room you are breathing in water vapour which also potentially enters your oesophagus (‘food’), with a much larger volume or ‘dose’ of water than is given by an inhaler (albiet not pressurised). The water ‘consumed’ in a steam room is also over a prolonged time in comparison to an inhaler. Therefore the water vapour consumed by the body is of potentially greater quantity and for a longer time.

Also, as explained in the text above, the taste of any medicine does not nullify the fast, therefore a residual taste which remains from an inhaler would also not break the fast (though after steroid inhalers it is recommended to rinse ones mouth as the usual procedure anyway).

So to be clear, you Can use your inhaler while fasting.

It seems that the only way many Muslims have of advising people is to use the term ‘God said’ and ‘religious blackmail’.

To conclude, using an inhaler does not break the fast.