I previously wrote an article about the story where they say that Prophet Moses PBUH was running naked so that his nation could see his private organs. You can read the article here; https://sulaimanahmed.com/2017/07/28/the-truth-about-the-study-quran-part-3-al-maturidi-and-who-are-the-theological-modernists/

I then wrote another article to clarify that Maturidi and some other scholars don’t accept the story. Please read it here; https://sulaimanahmed.com/2017/07/28/rejecting-maturidi-for-bukhari/

I had alot of positive feedback where people were glad to finally understand this issue. Some of them had the doubt already. Article helped them and many other people. I also had few emails with very important question, so I want to explain it briefly. Here is the question;

Quran confirms that Prophet Moses PBUH was offended by his nation Surah Ahzab; 69. Are you trying to say that Abu Mansur Maturidi and others reject this fact?

This question is based on missing the point of both of my articles. I didn’t reject the fact that Moses PBUH was insulted and humiliated by a group from his nation. I only rejected that aspect of the story which was about him ‘running naked behind a rock’.

No one rejects the fact that he was insulted. It’s well known that prophets and saints are also tested by hardship, physical illnesses, insults and other things. Quran actually mentioned some of the insults which were directed to him such as; He is a magician, he is effected by Magic… And some of the insults are not mentioned, as it was known from Jewish scholars and Holy gospels. We shouldn’t forget the fact that there was at a minimum three big Jewish tribes.

Imam Nasafi mentioned some of these insults, such as; Moses was accused of killing his brother Aaron PBUH, and Qarun accusing Moses for adultery by paying some prostitute to claim that she witnessed it. 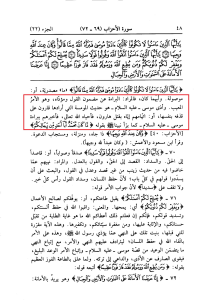 Also Buqai also confirmed that Moses was accused by Qarun, and that the prostitute  was paid to claim that Moses committed adultery with her.

Also Sheikh al-Islam Abu Sa’ud confirmed that a prostitute was paid to claim that Prophet Moses committed adultery with her.

There could be more insults which Jewish scholars may know from the Holy Gospels or some other narrative traditions.

From here we understand that no one rejected the fact that Moses was humiliated. A group of scholars only rejected the narration where it says that the Prophet Muses was running naked, and that people saw his private places, and that Moses was so reckless that he didn’t realise that he is in front of a people with no clothes on.

God mentioned this issue about Moses saying; O believers don’t offend the Prophet Muhammad as they offended Moses. And we know that Prophet Muhammad was offended by exactly the same insults, such as; He is magician, he is effected by magic, he killed people from the Jewish tribe (Banu Quraidha), he committed adultery with some queen, he had a sexual problems with alot of women including his cosine Zainab etc.

That much is known, but we only have an issue about the naked prophet.