I was recently linked into a post where some person had decided that due to the blessings of the holy month of Ramadhan he would make a ‘spiritually uplifting’ post in which he would attack Shia Muslims. It seems that the rather long fast has caused sleep deprivation and hunger, resulting in a severely negative affect on this individuals thought processes. The summary of his post was that the hadith of wiping on the Khaffayn (leather socks) is mutawātir (mass transmitted, like for example the Quran) and therefore Shia are committing an act of kufr (disbelief) by rejecting this hadith.

There were two reasons why I decided to comment on this issue. The first is simply that the post annoyed me by the manner in was treating other Muslims. The second is that a few years back whilst on a trip to Turkey, some professors made the same comment. At the time I thought that it was due to their weak understanding of the books of Usul (epistemic principles) that led them to make such a statement, even though they apparently teach Usul at university. But since then I have realised that it is a commonly held understanding of the issue.

The relied upon position in the Hanafi School is that the relevant narration is mashhūr (‘famous’) and not mutawātir. Here is an image from the authoritative book ‘Fath Bab al-‘Inayah’ by Mulla Ali al-Qari:

Here he states that it is mashhūr almost to the level of mutawātir, but to be clear it is not mutawātir.

Here is an image from ‘Radd al-Mukhtar ala al-Dur al-Mukhtar’ of Ibn Abideen, a late but famous Hanafi. 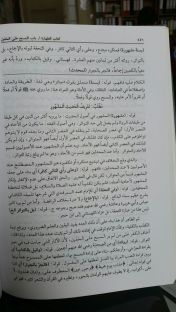 Here he confirms that the narration is ‘mashhūr’.

Here is an excerpt from our book ‘Hanafi Principles of Testing Hadith’ about ‘mashhūr’ hadith:

The linguistic meaning of ‘mashhūr’ is ‘famous’. In hadith terminology it means something which is initially aĥad (according to the Hanafis, this is any hadith that does not meet the conditions of mutawātir or mashhūr, see the next chapter ‘Ahad – The Statement of One [Person]’) but later became mutawātir. Further, the hadith must become mutawātir during the time of the Tābiʿīn (second generation) or Taba’ al-Tābiʿīn (third generation). According to the Shafi’is, a mashhūr hadith is a hadith which is not at the level of mutawātir, but has just three or more chains of narration. Therefore the mashhūr of the Shafi’is also encompasses a lot more hadith, but is still considered a type of aĥad.

To summarise, this issue has no real effect on our lives, but for some reason it causes panic amongst some Muslims and so-called ‘Muslim academics’. I have never understood why there is such a high level of hysteria regarding Dhanni (probabilistic or uncertain) issues amongst Muslims and can only imagine that some deep psychological reason is waiting to be uncovered.